It’s been a long time coming, but Airfoil Speakers Touch version 3 is finally here. It’s a free update, and we certainly suggest getting it in the iOS App Store immediately.

But what does this new version offer? First and foremost, we’ve finally got a native iPad interface. That’s right, you’ll no longer be stuck with a zoomed-in iPhone UI while using your iPad. Better still, this gorgeous new layout has full support for the iPad 3’s Retina display. Have a look: The other major feature in Airfoil Speakers is the new Enhanced Audio Receiving option. With an inexpensive in-app purchase, your iOS device becomes a full-fledged mobile AirPlay receiver! That means you can stream audio from one iOS device to another, or even send from iTunes directly to iOS. Why spend hundreds on a costly third-party AirPlay device, when you can use the iOS device you already have?

To use this, just launch Airfoil Speakers Touch on the receiving device. That device will now appear as an output option in iTunes’ AirPlay menu, as well as the AirPlay selector on other iOS devices. Just select it, and audio will flow out through your desired device. 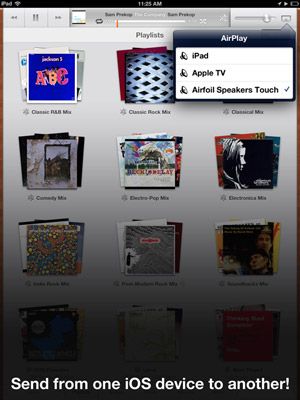 Airfoil Speakers Touch turns any iOS device into a powerful wireless audio receiver. On its own, it will work with other iOS devices and directly with iTunes. When teamed up with Airfoil, synchronized audio can be sent to all manner of devices, including AirPort Express units, Apple TVs, Macs, PCs, Linux boxes, and iOS devices. Once installed and launched, Airfoil Speakers Touch shows up right in Airfoil for Mac or Airfoil for Windows, as well as all AirPlay-capable audio apps on iOS. With just a few clicks or taps, audio from applications like Spotify, Rdio and more, as well as web-based audio like Pandora and Last.fm, can be sent right to any iOS device.

So get Airfoil Speakers Touch now from the iOS app store, and pick up the Enhanced Audio Receiving in-app purchase to maximize its potential. If you haven’t checked out Airfoil yet, get started sending audio from your Mac or PC out to your iOS devices and more.